VEAN GREGG – Baseball
A crafty southpaw pitching performer far ahead of his years in baseball, he led the American League in winning percentage by compiling 23-7 won-lost mark in 1911, his first campaign upstairs, then had 20-13 logs for the Cleveland Indians the next two seasons. From Aberdeen.

HUGH McELHENNY – Football
An electrifying runner on the gridiron, he was an All-American at the University of Washington and went on to greater fame in the professional ranks, earning a Pro Football Hall of Fame berth and a place on the San Francisco 49ers all-time backfield. He hung around for a long time in the pro ranks with great justification.

A brilliant University of Washington oarsmen in 1924 and ’25, he vaulted into the varsity crew coaching job at his alma mater in 1926 and remained as the Husky coach for 33 years, an illustrious career during which his alma mater prevailed sensationally.

Marvin â€œBud Ward was born May 1, 1913 in Elma, WA but grew up in Olympia and vaulted into the national golfing prominence by winning back-to-back U.S. Amateur titles before finally turning professional in California. By that time, he had swept the boards clean in Pacific Northwest competition, in addition to gaining a berth on the U.S. Walker Cup team.

When Ward entered the 1937 U.S. Open in Philadelphia, neither he nor golf’s observers had a clue who he was or how he’d do. But Ward went out and shot 69-73-71-72 to finish a shot behind Byron Nelson, Craig Wood and Dennis Shute, and suddenly rocketed onto the national golf scene.

Ironically, he’d been unable to enter any PNGA events before because he was not a member of a PNGA club. Upon joining Olympia Country & Golf Club in 1937, he entered the PNGA Men’s Amateur Championship at Tacoma Country & Golf Club, losing to Don Moe in the second round. He then qualified for the U.S. Amateur at Alderwood Country Club in Portland.

Bud looked more like a football lineman than a golfer. His stocky legs provided a solid base, and his wide shoulders powered long and accurate drives. Though he never played football, Ward played basketball at Olympia High School, where he was named to the all-state team. He also anchored the school’s golf team.

Though strong of build, Bud’s success may have been due to his surprisingly nimble hands and deft putting touch. The great Tommy Armour, the host professional at the 1939 Amateur, said Ward’s hands were as good as those of Vardon, Jones and Hagen.

In 1939, Spokane’s Athletic Round Table, an organization that fostered and promoted many sports activities, needed an executive secretary. They approached Bud about the part-time job and suggested he transfer from his current workplace, the State Tax Office in Olympia, to its Spokane branch. Ward liked the idea. He was about to get married and, by working two jobs, could earn enough to support his new family. Bud accepted the offer and moved to Eastern Washington. He joined Spokane Country Club and, shortly after, won the 1939 Northwest Open, the first of his five titles in that event.

Later in 1941, Vancouver-area golfers were treated to a rare exhibition match between the newly-crowned Ward and their beloved Canadian Amateur champion, Ken Black. The Red Cross fund-raiser was for the “Championship of North America.” The duo tied in stroke play with identical 71’s. 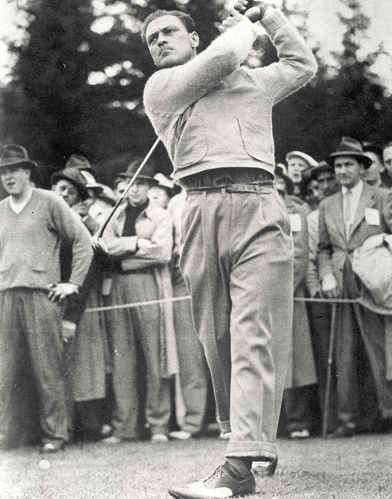